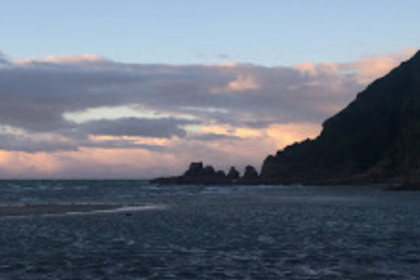 “Tomorrow night I will sing for you,” I said, just about holding it together, voice quavering and suddenly feeling a mixture of bravery and terror at the same time. I was at a creativity experianza, a weekend workshop of storytelling, singing, dancing and much more.

Something that not too long before I would have pretty quickly dismissed as I wasn’t ‘creative’.

We were sat around the fire on the first evening in a sharing circle, and when it was my turn I explained that three years previous I had made a promise to myself after a women’s retreat to learn to sing and to feel confident to sing in public. It hadn’t happened, but something about this environment felt safe amongst other creatives who knew what it felt like to be a beginner, to want to do something so much, to get over a fear.

The next morning, I attended a singing workshop which I thoroughly enjoyed but due to my lack of experience and by giving it 110% came out with a very croaky voice!

“Great,” I thought, “just what I need.” However as I croaked my way through the day I came to realise that this wasn’t about hitting every note perfect, it wasn’t about even remembering all the words, it was simply about getting up there and doing it.

The campfire was lit again that evening and the performers started taking their turns. My plan had been to get up pretty early on, but for one reason or another that wasn’t happening.

Then it did, and I found myself walking to the front of around fifty people, that had all been listening to beautiful music up till then…..

I shared my story of how during that retreat one exercise we did involved us making some noise to start with and then letting whatever else unfold. I shared how the noise that first came out seemed to be this thick black oily noise, but with time it started to break, sounding more like a very loud frog, and then out of nowhere I burst in to song. I explained how me getting up to the front was more about keeping a promise to myself, than the performance itself.

Well, as you can imagine I missed the notes and forgot a verse, but I did it, and not only that but my beautiful audience stood up and cheered!

I was later told that it wasn’t just a solo I did, but a capella, no accompaniment and something a lot of musicians will shy away from!

Although I was so grateful for the opportunity to fulfil this, what happened after meant the world to me. Another performer dedicated their story of courage to me, another lady with the most amazing talent got up and said she usually just supported other artists but felt after hearing my story, she could now get up on her own and play.

Two ladies came up the next day to say how moved and inspired they were, by my total conviction and courage.

We never know how our actions or words will inspire someone. You may not think you have anything to offer, but for someone else it is exactly what they need to see/hear right then.

Sometimes it is through facing our fears, we find our courage and through being open and vulnerable we find our strength.

What is it that you have been wanting to do for ages? What have you been putting off, take that first step. It will be worth it.