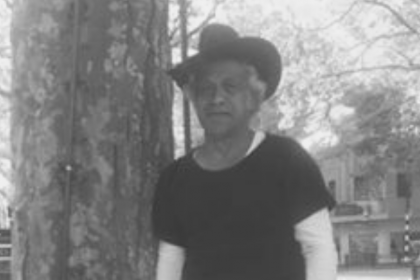 That was that question that Skippy was asked at a karoake event one night, and he replied “you’re looking at one!” Skippy was born with problems to his vocal chords, and did not start speaking till he was 7/8 and even then it was a mumble he remembers. The nickname Dumby soon caught on and it wasn’t until his girlfriend at the time, who became his wife told him not to take it, and certainly not to believe it, that things started to change. But it has stuck with some, and he still gets the odd person calling him that.

I met Skippy in Nelson on Gumboot Day and we had got talking in the street comparing gumboots and discussing mental health. Within just a short time, Skippy had told me some fascinating stories and so we decided to grab a cuppa so he could share more!

He shared how he was embarrassed to go to school and afraid of being bullied because of his struggles with talking. So he would get up and leave for school, hide out for the day and head back home when he saw the other school children on their way home.

He got this nickname, Skippy, because he worked on the railways for a while, and so could be spotted in Taumarunui. The next time you might spot home, could be Whanganui and then maybe you’ll see him at the station in New Plymouth another time, and so the name Skippy stuck.

He admitted after people calling out Kia Ora Dumby to him in the streets, Skippy sat with him just fine. There was one time that he was an inspector on the railways and to get his guys some more money, one would put a wire on the railway line that would cause a simple fault. The fault would be reported and his guys would get paid to be called out and remove the wire!

Skippy shared that after his wife died he was mistakenly put in to a mental health unit for a couple of weeks, which was a real eye opener! He told the story of one gentleman in there that never spoke to anyone, and after a visit from the man’s wife and child one day, Skippy followed him back to his room to give him a balloon his son had left for him, and was welcomed in to this man’s room for a chat. That really touched me, because it comes back to that idea that sometimes the smallest act of kindness can mean so much and open doors, start conversations and subsequently friendships.

Skippy says he remembers growing up and everyone pitching in, whether it be amongst his friends or within the wider community. He says there was never a you-owe-me kind of mindset, everything was just there to be shared. He fondly remembers swapping fry bread for a ride on the bike of one of the ‘pakeha’ kids! He said we were always just one.

Seems his Dad told him that you can only go so far as a Maori, you have to learn the pakeha way. Being told off at school for not speaking English, we discussed that there has been a big turn these days, with more people learning Te Reo than ever before.

The theme of judgement came up a fair bit when we were talking, and he shared a story of when he was needing help on a job and he couldn’t get anyone to give him a hand. In the end his friend at the panel beaters recommended someone and Skippy went to pick him up. All ready to go, they got to the job and made a start. Things were going well, but after a while he started slowing down and slurring slightly. When he started staggering Skippy stopped him and, despite what his thoughts were, he asked what was happening.

The guy explained that he had not been able to afford his medication, and was struggling with the withdrawals. Skippy told him to put his tools down and off they went in to town to get the medication and have a feed. We talked about how easy it is to judge people, and how we had both judged the pianist when he started as he was tinkering while having some other music playing, and let’s just say it wasn’t the easiest to listen to! But then he turned the music off and played some beautiful pieces, and we were reminded yet again of how easy it is to judge people and how quickly we can form an opinion.

Another example of this was when he was telling me about first starting out as a painter and decorator, before he started his business. He was getting $13 a week, and quite happy with that. Unbeknownst to him his boss was actually being paid $18 a week for him, and passing on just $13. Of course, this got my back up till Skippy explained that he only found this out when his boss presented the remainder to him to be used as a deposit on a house. He knew, and rightly so apparently, that Skippy would have spent it all, had he been given the full amount!

So back to the karoake, there Skippy was one night minding his own business at the karoake night, and after saying to someone that he was the Maori that couldn’t sing, someone came up on stage and put his absolute all in to a song which inspired Skippy so much he thought he would have a go. Now it seems, you can’t stop him! With regular requests to appear, and often with a song list organised for him, ready to go!

He talked about the recent bush fires and how he was captured by the media taking precious items from his home to save, which included his cat and a picture of Richie McCaw!

I asked Skippy what thought would he wish everyone knew. He said he was reading a book called The Present, with the message being ‘learn from the past, plan for the future, live in the now.’

My reflections – Firstly, that this all came about because I made the decision to stop and listen to the pianist. It could have been so easy to carry on with my day. Also it just renewed my love for finding out about people and their stories. What, as storytellers, we can share with the world that may help others, may teach others or may inspire them. Thank you Skip!