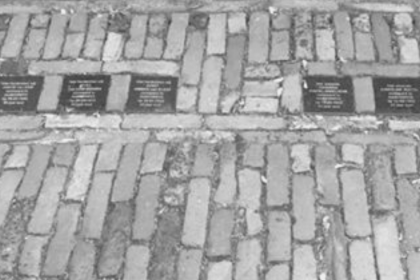 Travelling in The Netherlands last week, and a friend pointed out the Stolpersteine discreetly placed in to the cobble stones on the street. The first ones she pointed out marked the names of three members of the same family, and the date they were killed in Auschwitz. The oldest was 27, the youngest was 3.

I just stood there staring at them. Three members of the same family, the stones placed outside the home that they had lived in to mark their memory. The same river running by near their house, the same cobble stones, surrounded by the town’s old stone walls from way back. I imagined the family living there, enjoying the delights a three year old can bring to any family.

The ones in the picture were outside the synagogue close by. Both sets and ones I saw in between really made the atrocities of the Second World War that much more real for me. When talking/reading about the concentration camps, it is about the numbers of Jews and others that were killed, but this really brought home that of these masses, it was made up of individuals. Members of the same family, or friends, colleagues – their crime? Their faith.

The Stolpersteine project started in 1992 by a German artist, Gunter Demnig, aiming to remember these individuals where they lived or worked last. At the last count, 23rd October 2018 70,000 of these stones had been laid. They cover countries including Germany, Austria, Hungary, the Netherlands, Italy, Belgium, Norway and more, making it the world’s largest decentralised memorial.

Even just understanding about these plaques really made an impact on me. I have subsequently read the true story of The Tattooist of Auschwitz, by Heather Morris. This amazing recount helped me understand more about what these individuals would have gone through.

It truly puts everything in perspective when the son of the Tattooist recounted a memory at the end of the book. It was during some tough times later on in life when his Mum was singing. He questioned how she could be cheerful when they were dealing with what they were. His Mum replied “when you spend years not knowing if in five minutes time you will be dead, there is not much you can’t deal with. As long as we are alive and healthy, everything will work out for the best.”

So, so much to be grateful in life. It reminded me how we can create captivity for ourselves whether it be in a job, living situation or relationship. Do you feel free?

Values that you are living by, are they truly yours? Are you living true to what is important to you? Do you fear anything, dread going to work, or a particular situation in your life? Do you feel confident and strong enough to stand by what you believe? Do you take the time to recharge so you can have the energy to do what you are passionate about?

Not for one second comparing our lives today with those in the concentration camps. I am simply asking what small changes could you make in your life to really help you live it to the full? An option that thousands of these victims of the Nazi regime didn’t have….